The Great Sphinx lies in a hole in the ground facing due East, naming the Pyramids on the Giza Plateau as a magnification site. Created in one piece of solid limestone at 57 meters long, 6 meters wide and 20 meters tall or the height of a 6 storey building it is the world’s largest single stone statue.


In deciphering the hieroglyphs it became apparent that characteristics of the plants and animals are analogous to the Universe. It is the roar of a lion which is one of the loudest noises any animal on Earth can make, up to 114 decibels and comparable to a jet engine. The reason lions can magnify sound so greatly is their vocal cords are shaped as a square rather than a triangle, therefore the lion is a symbol of Magnification. This is confirmed because of the placement of other lions used in Egyptology, one such example is the two North-South facing lions on the Tutankhamen headrest, describing the Plasmasphere - Shu, and Magnifying Resonance of the Earth - Pakhet.

The Sphinx faces due East and is located below ground level embodying the Earth, it therefore describes the function of the Pyramids at the Giza Plateau as a magnification site for waves in an Easterly direction, with the ability to charge the Earth using the Sun by manipulating the Earths charge store. The hieroglyphs describe how negative charge is absorbed into the land using Pyramids, this charges the Earth changing the scale height of the ionosphere ( Nephthys ) and magnetic field strength indicated by Seshat. The Earths magnetic field would then be an order of magnitude greater, allowing the ionospheric wave guide to magnify waves travelling to the East - the same direction the Sphinx is facing.

Below the Sphinx, located between the front paws there is an inscription known as the Sphinx Stele. The Sphinx Stele is shown below, using the true hieroglyphs at GodElectric it explains how our planets charge store has been supported by electricity from the galactic core. The Atef crown worn by Osiris, shows how negative charge is collected to the galactic core. This negative charge is then projected outward into Pyramids to charge celestial bodies in order to support life. GodElectric deciphered the pot to represent a store of charge and the hieroglyph of a pot supported by a loop is used to define the planetary body or Earth as a supported charge store. The Sphinx on the left side of the Stele is shown drinking from the pot, therefore defining the charging of planet Earth.


The Stele explains how this charge is delivered using Pyramids and the Sun with the Sphinx on the right hand side labelled as God Watching delivery of Surplus Negative Charge. The Plasma connection between the supported charge store earth, and the surplus charge store as 'God' is shown supported by the Sun. 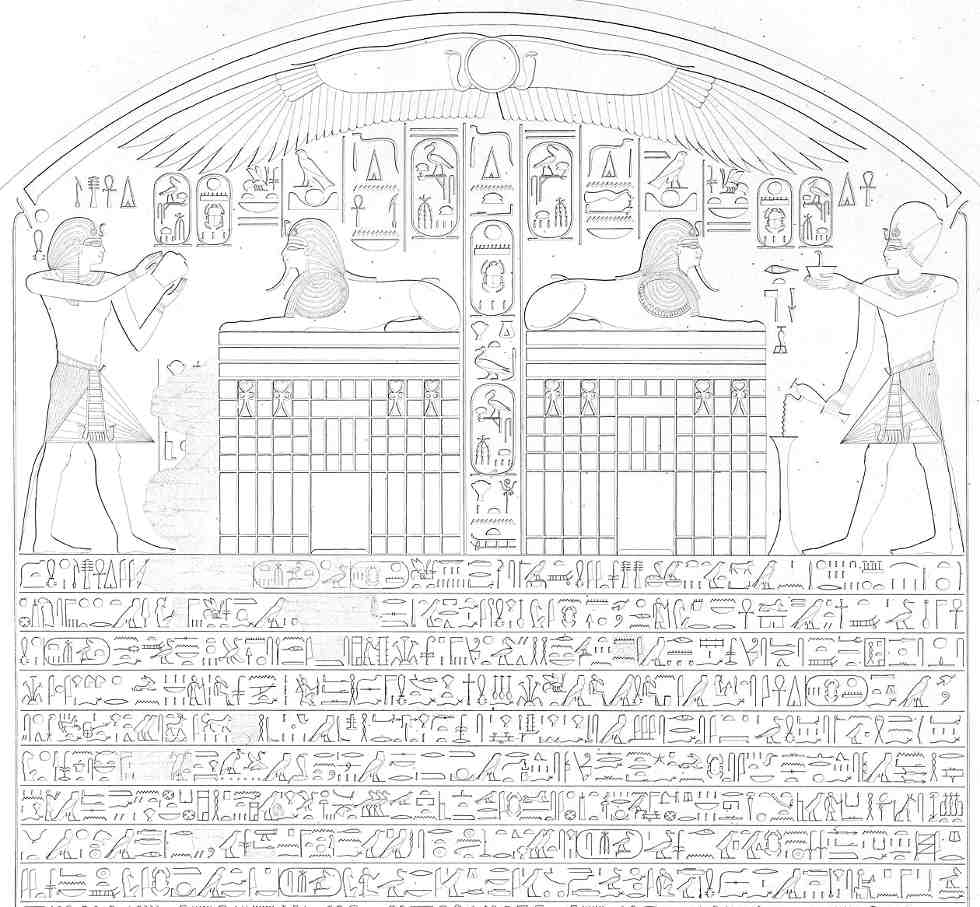 Right side ['God'] "Watching Negative charge and magnetic field (delivery) by God to create surplus charge store. Support life using pyramid." Then two cartouches describe a circuit, the first cartouche using the "Electric potential of many negative charges causing lightning" and the second cartouche is the "conduction of supernovae energy of the Stars". The wasp and wheat plant describes the pollination or attraction of opposite charges in the aether, its describes negative charge attracted toward the anode which is a star.

Left side [Planet Earth] "Pyramid supports life receive energy from dielectric to planet as a supported charge store." - Sphinx is being offered the negative charge inside the Nemset vase or pot symbolizing the charging of planet Earth.

Left and right sides are linked via plasma link at the top of the Stele defining the connection of the circuit supported by the sceptre or received power from the cosmos.

Menkaure, Khafre and Khufu Pyramids are in fact far older than the 2000BC estimate that carbon dating suggests. The pyramids were originally lined in Tura limestone which has since been removed, meaning the Pyramids cannot be accurately dated using geological methods. Also the Sphinx was originally buried, the body is shown partially excavated in 1878 and the exposed head showing evidence of reconstruction. The study of archaeology and the dating of ancient structures was previously based on the assumption that these structures were originally man-made. The GodElectric translation of the hieroglyphs can confirm that this assumption was false and accurate dating will require open-minded reassessment.

The GodElectric hieroglyphs explain that the structures on the Giza Plateau were constructed by beings from another planet that use what is termed 'Gods Electricity' or 'Gods Negative Charge' to charge celestial bodies in space supporting life in the universe. The substantial foundations exhibit virtually no creep and also the precise alignment and tolerances all supersede Engineering of today. The sphinx and its surrounding walls all exhibit water erosion from precipitation and palaeoclimatologist agree that lakes were in the area 10,000 years ago. But the actual age remains unknown.